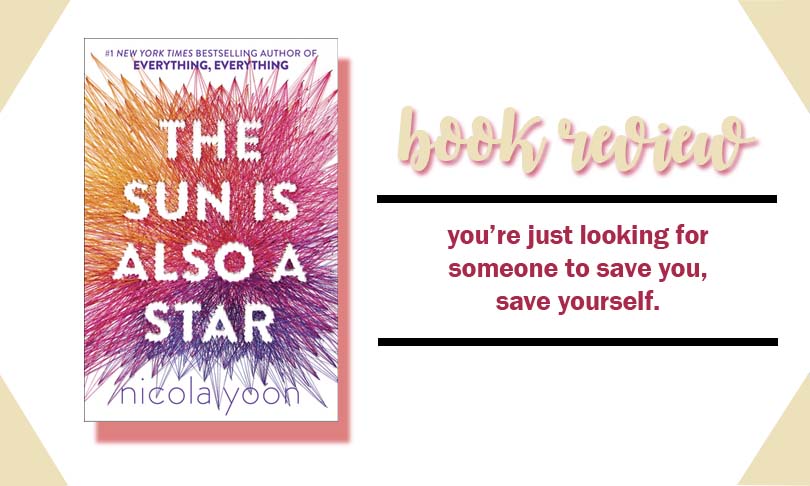 Book Review | The Sun Is Also A Star

Title: The Sun Is Also A Star
Author: Nicola Yoon

Natasha: I’m a girl who believes in science and facts. Not fate. Not destiny. Or dreams that will never come true. I’m definitely not the kind of girl who meets a cute boy on a crowded New York City street and falls in love with him. Not when my family is twelve hours away from being deported to Jamaica. Falling in love with him won’t be my story.

Daniel: I’ve always been the good son, the good student, living up to my parents’ high expectations. Never the poet. Or the dreamer. But when I see her, I forget about all that. Something about Natasha makes me think that fate has something much more extraordinary in store—for both of us.

The Universe: Every moment in our lives has brought us to this single moment. A million futures lie before us. Which one will come true?

I must admit that the only reason I picked this up was the title and the cover. I judged the book by its cover. I mean, look at that string art.

Reading the blurb now, I would still definitely pick this up because of science, facts, poet, and universe. That is just so me.

It is written in first person but there’s an exchange of perspective from Natasha to Daniel. Plus, the other characters’ POV that leads them in that situation they are in. That is how you tell a story. That is how you show the ripple effect. I am italicizing words because I want to emphasize this. Aaaa ~

Natasha is going to be deported back to Jamaica with her family. Daniel is well, writing poems, looking for some sign that will take his life to another direction. This and that lead to this and that, which is generally exciting on its own. We all have a story to tell.

Everything happened in a day. Just a day.  But, it is not rushed and compressed just so there will be a story. It flows smoothly. There is no major plot twist that will make you go, “OH MY GOD!!! I DID NOT SEE IT COMING!!!” It is very realistic. The impact is between the words. It is in the words itself, how it is written and conveyed.

I am still not into meeting someone and then just instantly click. But, I will let that part slide because IT IS SO GOOD.

Natasha Kingsley doesn’t believe in God. She only believes in science, data, and facts. SHE HATES POETRY! (I’M OFFENDED.) So anyway, her family moved to America when she was eight because his father wants to pursue his dreams but he messed up. Now, they are being deported back to Jamaica. Natasha tried her best to make them stay.

Daniel Jae Ho Bae is a poet, but his parents want him to pursue medicine. He looked for signs that he thought might change the path of his future. His family owns a business called Black Hair Care and it is basically full of beauty supply and relaxer for the afro.

Yes, that’s right. Natasha is African-American and Daniel is Korean-American. I love how we get to explore both cultures here. Yoon is a genius. Though, I don’t like how some Korean words are not in proper romanization, like umma. Well, I’ll repeat myself—Hangul is not meant for that. Anyway, it doesn’t change the fact that THE STORY IS GREAT.

I’m contemplating if I will consider this a huge character development but I guess they both learned from each other and the people around them which says so much about their growth. This one-day setting is filled with too much reflections. I always stopped short to re-evaluate my life.

I really love how the ending is not strained. There is a good touch of not letting it work out right away until it just naturally rolled out on its own. It will lead you thinking.. so, is it destiny or fate? Personally, it is both. Fate moved by choices. I think the options laid upon us are the consequences of other people’s decisions. We are all connected. It might be a small nudge on your end, but it can be an earthquake for someone else’s.

This is the life you’re living. It’s not temporary and it’s not pretend and there’s no do-over.

5 thoughts on “Book Review | The Sun Is Also A Star”

And while you are here, I hope you can leave me a tip. :)