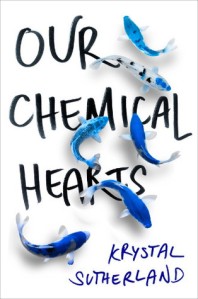 Henry Page has never been in love. He fancies himself a hopeless romantic, but the slo-mo, heart palpitating, can’t-eat-can’t-sleep kind of love that he’s been hoping for just hasn’t been in the cards for him—at least not yet. Instead, he’s been happy to focus on his grades, on getting into a semi-decent college and finally becoming editor of his school newspaper. Then Grace Town walks into his first period class on the third Tuesday of senior year and he knows everything’s about to change.

Grace isn’t who Henry pictured as his dream girl—she walks with a cane, wears oversized boys’ clothes, and rarely seems to shower. But when Grace and Henry are both chosen to edit the school paper, he quickly finds himself falling for her. It’s obvious there’s something broken about Grace, but it seems to make her even more beautiful to Henry, and he wants nothing more than to help her put the pieces back together again. And yet, this isn’t your average story of boy meets girl. Krystal Sutherland’s brilliant debut is equal parts wit and heartbreak, a potent reminder of the bittersweet bliss that is first love.

This sounds cliché to me with the “something broken” and “to help her put the pieces back together again” thing. I’ve read lots of books that almost gone through the same scenarios. But this is somehow true that “this isn’t your average story of boy meets girl”. It has so much more depth in it than you’d realize. Also, the cover is the real deal here. 3D is life! And anything blue is 💙.

I love it when a female author writes in a male POV and vice versa. Like how? How do you sound like your opposite sex? Krystal did a great job writing her protagonist, Henry Page. I also like how the book shows our life style in this digital era we are in—social media and all that stuff. Kudos to the bubble messages from Messenger. I think it adds more dimension to the book when there are letters included in it, in different fonts. I just love it. And the “Why You Should Date Me” Powerpoint is also printed on the pages which is more fun to read.

This is also informative with all the music preferences and poetry! You really must read it yourself because there are just so many quotable lines here. Ideas are so mind blowing as well it will make you stop reading and just ponder about a certain thought you’ve just read.

“When I look up into the night sky, I remember that I’m nothing but the ashes of long-dead stars. A human being is a collection of atoms that comes together into an ordered pattern for brief period of time and then falls apart again. I find comfort in my smallness.”

“I love you as certain dark things are to be loved, in secret, between the shadow and the soul.” – Pablo Neruda

It has a very interesting twists and turns that if I go into details, it might spoil you and I don’t want you to hate me for that! So, if there’s one thing I want you to know about this story is it doesn’t end the way you think it would. Again, not that typical. Also, it has built a good sense of friendship. It made me miss my high school years. Sometimes, it’s not about the school, it’s about the people we are with.

Just to sum it up, Henry fell in love with Grace or rather to the idea that he can fix Grace. Kintsukuroi. We love mystery and depth, don’t we? But Grace was too much of a mess, soooo broken that nothing seems to help her. No one can help a broken person but his will to let go and move on from it. But I guess, we’ll never learn.

They worked on their school publication and it was the last minute that they finally decided what the theme should it be. It’s redemption. The flow of the story runs so smoothly.

If Henry Page isn’t a writer in their school paper, I would cringe everytime he talks like a genius poet. But he is and I think that’s a good move by Sutherland. I also like how Henry’s character is molded by his parents, his two best friends, Murray and Lola and of course, Grace. Every single person in his life has made an impact on him. You can tell with his words, how he thinks and how he makes decisions. And as a writer, it is given that most of the times, we are more comfortable in writing down our thoughts than saying it aloud.

And I like how opposite Grace Town is from Henry. She used to be a writer but she keeps telling Henry to just say exactly what he wants to say than writing it down because then it will be filtered. Grace has come to realization that sometimes, words don’t give justice on the pain or how we feel in general. And I totally understand her in there. You can really relate to her character but she somehow frustrates me, too. “Girl, save yourself!!!” She’s not the typical damsel in distress but she still is somehow. Her character left a mark on me that I ended up writing a poem. It’s called She’s Not Happy and it is published on Thought Catalog. You can check that out if you want.

I also like how Sutherland used an Australian, Murray Finch, and half Chinese and half Haitian and “100 percent gay”, Lola Leung in her characters. Very well diversified. I got to see a bit of their cultures and beliefs and that’s what a good book must do to you. You don’t just learn from the story alone but the characters must give out something, too. Henry’s sister, Saddie, is very comfortable to be with as well! Like the coolest sister/mom you can wish for.

Every character is just full of wit and humor and depth you just gotta love everyone!

“The best thing the universe ever gave us is that we’ll all be forgotten. […] I kinda like the idea. That when we die, despite any pain or fear or embarrassment we experienced during our lives, despite any heartbreak or grief, we get to be dispersed back into nothingness. It makes me feel brave, knowing I’ll get a blank slate at the end. You get a brief glimmer of consciousness to do with what you will and then it’s given back to the universe again. I’m not religious, but even I can appreciate that that’s redemption, on the grandest scale. Oblivion isn’t scary; it’s the closest thing to genuine absolution of sin that I can imagine.”

Thank you for reading!
If my words reach you somehow,
I hope you can support me
by donating either
through Ko-Fi or Paypal.
I appreciate you lots.